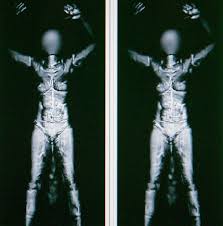 Controversial airport ‘strip-search’ scanners are to be scrapped after they failed to get approval from European bosses.

Experts feared the ‘naked’ body scanners, which use X-ray technology to show up hidden explosives or weapons, could emit harmful levels of cancer-causing radiation.

New trials of the device, which display a ‘naked’ image of the person being scanned – were blocked by the European Commission last November.

Now, after the machines have come to the end of their three year trial, European Commission chiefs have failed to give their approval for their full time use.

But bosses are still waiting for the green light and now say they have been left with no option but to axe the 16 security machines because Brussels legislation does not allow security trials to exceed a three-year period.

The scanners were first introduced at Manchester airport in a pre-arranged security crackdown after incidents such as the attempted ‘underwear bomb’ plot in 2009 which saw a man with no ticket/id escorted onto a plane by 3 men in black suits. Not strange at all!

Passengers selected for scanning have, in the past, been banned from flying if they refuse to pass through the device.

The airport said around 10 passengers were unable to board their flight after refusing to pass through the scanners, known as ‘back scatter’ machines.

They were used at Heathrow but scrapped amid complaints about invasion of privacy. They have also been tested in Germany, France, Italy, Finland and Holland.

Research has suggested that, despite the low radiation dosage, because of the large number of scanners in the U.S., hundreds of passengers a year could get cancer.

When there were 250 scanners in the U.S. last year, research suggested up to 100 passengers a year could get cancer.

Earlier this year it was reported that more than 600 Advanced Imaging Technology units, using X-ray technology, have been installed at 140 airports across the U.S. This means between 400-600 passangers a year would get cancer.

Los Alamos scientists have proven Airport scanners shred human DNA, but nothing was ever done about it.

‹ Distortion in Tax Code Makes Debt More Attractive to Banks
Revolutionary life saving Palantir software denied to the 3rd Infantry Division because of Red tape. Even though the company offered its technology on a cost-free basis ›

Categories: All Posts, Lethal or Unintended Side Effects