Anti-cuts protests erupt on streets of Athens and Madrid: ” 70,000 people marched to the Greek parliament chanting “EU, IMF Out!” 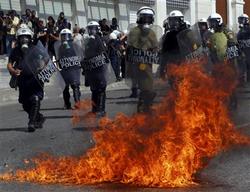 By Renee Maltezou and Julien Toyer

ATHENS/MADRID (Reuters) – Demonstrators have clashed with police on the streets of Athens and Madrid in an upsurge of popular anger at new austerity measures being imposed on two of the euro zone’s most vulnerable economies.

In some of the most violent confrontations on Wednesday, Greek police fired tear gas at hooded rioters hurling petrol bombs as thousands joined the country’s biggest protest in more than a year.

The unrest erupted after nearly 70,000 people marched to the Greek parliament chanting “EU, IMF Out!” on the day of a general strike against further cuts demanded by foreign lenders.

In Madrid, Prime Minister Mariano Rajoy faced violence on the streets of the capital on Tuesday, and growing talk of secession in Catalonia as he moves cautiously closer to asking Europe for a bailout, aware that such an action has cost other European leaders their jobs.

In public, Rajoy has been resisting calls to move quickly to request assistance, but behind the scenes he is putting together the pieces to meet the stringent conditions that will accompany rescue funds.

Rajoy presents a tough 2013 budget on Thursday, aiming to send a message that Spain is doing its deficit-cutting homework despite a recession and 25 percent unemployment.

Spain appears on course to miss its public deficit target of 6.3 percent of gross domestic product this year, and the central bank said the economy continued to contract sharply in the third quarter.

On Friday, Moody’s will publish its latest review of Spain’s credit rating, possibly downgrading the country’s debt to junk status.

On the same day, an independent audit of Spain’s banks will reveal how much money Madrid will need from a 100 billion euro ($130 billion) aid package that Europe has already approved for the banks.

HEADING FOR A BAILOUT

Rajoy is gradually shedding his reluctance to seek a sovereign bailout for the euro zone’s fourth biggest economy – a condition for European Central Bank intervention to cut his country’s borrowing costs.

He suggested on Wednesday that he would make the move if debt financing costs remained too high for too long.

“I can assure you 100 percent that I would ask for this bailout,” he told the Wall Street Journal.

He also said he had not made his mind up on whether to allow pensions to rise in step with inflation, which could cost the government an extra 6 billion euros this year.

“We need to be sufficiently flexible in order not to create any further problems,” he said when asked about pensions.

His remarks, coupled with the central bank’s warning on the economy helped drive up Spain’s borrowing costs, with the yield on the benchmark 10-year bond jumping to 6 percent, a level seen as unsustainable in the medium term. The index of leading stocks fell 3.46 percent to a two-week low.

The Spanish government’s drive to rein in regional overspending as part of its austerity measures has prompted a flare-up of independence fervor in Catalonia, the wealthy northeastern region that generates one-fifth of Spain’s economic output.

Catalonia needs a 5 billion-euro bailout from Madrid to meet debt payments this year, but Catalans believe they bear an unfairly large share of the country’s tax burden.

Artur Mas, the conservative president of Catalonia, announced on Tuesday he would hold early elections in November after Rajoy rebuffed his call for more tax autonomy.

On Wednesday Mas took things further, saying Catalonia should also hold a referendum on independence, which the central government says would be unconstitutional.

With Rajoy under new pressure from the Catalans, his fellow euro zone struggler, Greek Prime Minister Antonis Samaras, also faced a major test, in the shape of a 24-hour strike called by the country’s two biggest unions.

Ships stayed in port, museums and monuments were shut and air traffic controllers walked off the job. Trains and flights were suspended, public offices and shops were shut, and hospitals provided a reduced service.

Union anger is directed at spending cuts worth nearly 12 billion euros ($16 billion) over the next two years that Greece has promised the European Union and International Monetary Fund in an effort to secure its next tranche of aid.

The bulk of those cuts is expected to come from cutting wages, pensions and welfare benefits, heaping a new wave of misery on Greeks who say repeated rounds of austerity have pushed them to the brink and failed to transform the country for the better.

“My husband has lost his job, we just can’t make ends meet,” said Dimitra Kontouli, 49, a local government employee whose salary has been cut to 1,100 euros a month from 1,600 euros.

Unions argue that Greece should remain in the euro but default on part of its debt and ditch the current recipe of austerity cuts in favor of higher taxes on the rich and efforts to nab wealthy tax evaders.

But with Greece facing certain bankruptcy and a potential euro zone exit without further aid, Samaras’s government has little choice but to push through the measures.