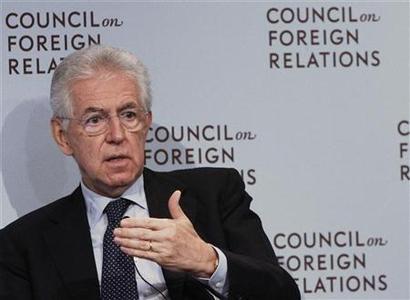 1 of 7. A protester covers himself with a CGIL union flag during a rally in downtown Rome September 28, 2012. Two of Italy’s biggest unions marched through Rome on Friday to protest against Prime Minister Mario Monti’s cuts in public spending as opposition grows to austerity policies aimed at steering the country out of its economic crisis.

ROME (Reuters) – Up to 30,000 members of two of Italy’s biggest unions marched through Rome on Friday to protest against Prime Minister Mario Monti’s cuts in public spending, forcing the closure of the Colosseum.

Opposition to austerity policies aimed at steering the country out of its economic crisis is growing as the year-long recession shows no signs of letting up and unemployment continues to rise.

The march by mainly public sector workers followed clashes between anti-austerity protesters and police in Madrid and Athens this week and coincided with a second day of labor unrest at the ILVA steel plant in southern Italy.

Staff at the Colosseum and the Roman Forum walked off their jobs, closing two of the city’s top tourist attractions. The morning rush-hour traffic was badly snarled but the rally was peaceful.

“At the moment, I just can’t see a future that gives us any hope, particularly for the youth,” former soldier Emilio Amiraglia said at the event.

Monti’s coalition passed spending cuts in August that included a modest downsizing of the public sector, where wages have already been frozen for more than two years, and cuts to state healthcare funding.

The spending cuts followed unpopular austerity reforms and an overhaul of hiring-and-firing rules that drew stiff opposition and protests from labor unions earlier this year.

To head off a Greek-style debt disaster, Monti raised taxes and cut pensions when he took over from Silvio Berlusconi in November, subjecting Italians to an “unprecedented amount of sacrifices,” Monti said in an interview on CNN this week.

“We are here to protest against Monti’s politics, because up until now he has just made the weakest pay,” said Pio Zappaterreno as he rallied with fellow members of CGIL, Italy’s largest union, in the city centre.

“It’s not true that by cutting the public administration they will reduce debt. They will make it worse,” CGIL Secretary General Susanna Camusso told the crowd. “The policy they have followed so far has made things worse, not better.”

Austerity measures have hurt household spending and deepened Italy’s recession. Italian unemployment rose to 10.7 percent in July, the highest since 2004.

Since August, anger over austerity and job losses has led to a growing number of industrial disputes, including at the ILVA steel mill in Taranto and at an aluminum smelter in Sardinia.

Although Monti is the most popular political figure in Italy, his comments on Thursday that he would be willing to serve again if no clear leader emerged from elections next spring prompted a chorus of complaints from opposition parties.