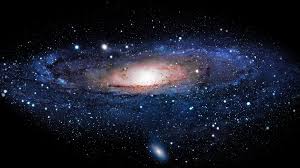 From the idea that our universe is one among many, to the revelation that mathematician Pythagoras didn’t actually invent the Pythagorean theorem, here are eight shocking things we learned from reading physicist Stephen Hawking’s new book, “The Grand Design,” written with fellow physicist Leonard Mlodinow of Caltech.

The book, covering major questions about the nature and origin of the universe, was released Sept. 7 by its publisher, Bantam.

1. The past is possibility

According to Hawking and Mlodinow, one consequence of the theory of quantum mechanics is that events in the past that were not directly observed did not happen in a definite way. Instead they happened in all possible ways. This is related to the probabilistic nature of matter and energy revealed by quantum mechanics: Unless forced to choose a particular state by direct interference from an outside observation, things will hover in a state of uncertainty.

For example, if all we know is that a particle traveled from point A to point B, then it is not true that the particle took a definite path and we just don’t know what it is. Rather, that particle simultaneously took every possible path connecting the two points.

Yeah, we’re still trying to wrap our brains around this.

The authors sum up: “No matter how thorough our observation of the present, the (unobserved) past, like the future, is indefinite and exists only as a spectrum of possibilities.”

2. The power of light

This fun fact: A 1-watt night-light emits a billion billion photons each second.

Photons are the little packets that light comes in. Confusingly, they, like all particles, behave as both a particle and a wave.

If there is any “theory of everything” that can describe the whole universe, it is M theory, according to Hawking and Mlodinow. This model is a version of string theory, which posits that at the tiniest levels all particles are fundamentally little loops of string that vibrate at different frequencies. And, if true, all matter and energy would follow rules derived from the nature of these strings.

“M theory is the only model that has all the properties we think the final theory ought to have,” the authors write.

One consequence of this theory is that our universe is not the only one – untold numbers of cousin universes exist with different physical laws and properties.

If most people think of general relativity at all, they assume this high-minded idea of Einstein’s applies only to super-large objects completely outside the realm of normal life, such as galaxies and black holes.

But actually, the warping of space-time does affect things we know and use, the authors point out.

“If general relativity were not taken into account in GPS satellite navigation systems, errors in global positions would accumulate at a rate of about ten kilometers each day,” the book states. That’s because general relativity describes how time flows slower the closer an object is to a large mass. Thus, depending on satellites’ distances from Earth, their onboard clocks will run at slightly different speeds, which could offset position calculations unless this effect is taken into account.”

A few years ago, the city council of Monza, Italy, barred pet owners from keeping goldfish in curved bowls. This law was meant to protect the poor fish from a distorted nature of reality, since bent light might show them an odd portrayal of their surroundings.

Hawking and Mlodinow bring up the incident to make the point that it is impossible to know the true nature of reality. We think we have an accurate picture of what’s going on, but how would we know if we were metaphorically living in a giant fishbowl of our own, since we would never be able to see outside our own point of view to compare?

In passing, the authors casually assert that the famous Greek mathematician Pythagoras did not actually discover the Pythagorean theorem.

A little digging suggests the formula (a2 + b2 = c2, which describes the relationship between the three sides of a right triangle) was actually known earlier. The Babylonians, for example, seem to have documented the basic idea in ancient mathematical tablets before Pythagoras came on the scene in 570 B.C.

Quarks, the adorably named building blocks of protons and neutrons, come only in groups, never alone. Apparently, the force that binds quarks together increases with distance, so the farther one tries to pry a lone quark away, the harder it will pull back. Therefore, free quarks never exist in nature.

Protons and neutrons are both made of three quarks. (Protons contain two “up”-flavored quarks and one “down,” while neutrons have two downs and one up.)

8. The universe is its own creator

One of the most talked-about assertions in the whole book is that we don’t need the idea of God to explain what sparked the creation of the universe.

“It is not necessary to invoke God to light the blue touch paper and set the universe going,” Hawking and Mlodinow write.

Instead, the laws of science alone can explain why the universe began. Our modern understanding of time suggests that it is just another dimension, like space. Thus it doesn’t have a beginning.

“Because there is a law such as gravity, the universe can and will create itself from nothing,” they write. “Spontaneous creation is the reason there is something rather than nothing, why the universe exists, why we exist.”

‹ China lands fighter jet on new carrier in show of force
Catalans have set their region on the road to independence, voting in pro-separatist parties that will push for a referendum on breaking away from Spain. ›