Breach of security at ‘Fort Knox’ of uranium sets off alarms 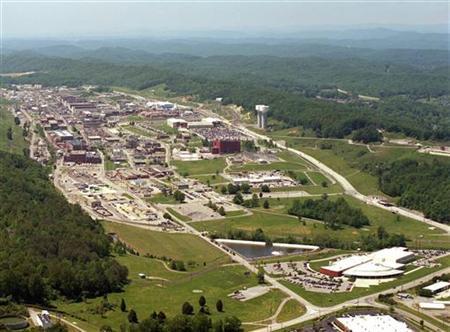 An aerial view of the Y-12 Plant in Oak Ridge, Tennessee is seen in this U.S. government handout photo released on August 3, 2012.

(Reuters) – In July 2012, three aging anti-nuclear activists, including an 82-year-old nun, cut through fences surrounding the “Fort Knox” of uranium storage, and U.S. lawmakers want to know how that was possible.

The facility is a major storage center for highly enriched uranium, a key component of nuclear bombs. The security breach at what was supposed to be one of the most secure facilities in the United States has raised new questions about a plan to overhaul oversight of nuclear laboratories and weapons plants.

An internal Energy Department watchdog found guards ignored motion sensors because they are routinely triggered by wildlife, and a security camera that should have shown the break-in had been broken for about six months.

The Republican-controlled House of Representatives has approved a plan to give more flexibility to the contractor-run facilities that make up the U.S. nuclear weapons complex, part of its annual defense policy bill passed in May.

The governance reforms were geared to address a long legacy of cost overruns and mismanagement at the National Nuclear Security Administration (NNSA), an Energy Department agency.

But Republicans and Democrats on the House Energy and Commerce committee said the plan needs to be re-examined after the breach by the anti-nuclear activists.

Unstopped until they walked up to a security guard’s car and surrendered, the activists vandalized the exterior of the Y-12 facility in Oak Ridge, Tennessee.

The contractor-run facility was built after the September 11, 2001, al Qaeda attacks on New York and Washington, and was once touted as “the Fort Knox of uranium” because of its security features.

“If there’s ever a time for more aggressive oversight, this is it,” Republican Representative Joe Barton said at a hearing of the House Energy and Commerce Committee on Wednesday.

Barton thanked Sister Megan Rice, a peripatetic nun of the Catholic order of the Sisters of the Holy Child Jesus, for the risks she took in exposing the lax security.

“If she had been a terrorist, the Lord only knows what could have happened,” Barton said.

The changes proposed in the defense policy bill would give the NNSA more independence from the Energy Department, cut staff at the NNSA and give more authority to contractors.

The reforms would ensure contractors have strong internal management systems, rather than having the government monitor individual items, said Linton Brooks, who led the NNSA during the George W. Bush administration and supports the idea.

“Despite the caricature of opponents, this is not reduced oversight, but more effective oversight,” said Brooks, now an adviser with the Center for Strategic and International Studies.

The White House said in May it “strongly objects” to the proposed governance changes in the House version of the bill, which it said would lessen health and security protections.

The Senate Armed Services Committee did not include similar changes in its version of the bill, which is not expected to move through Congress until after the November 6 elections.

Energy Department Inspector General Gregory Friedman told lawmakers he had found multiple failures of sophisticated security systems and “troubling displays of ineptitude” in a review of what happened at Y-12.

The incident is a prime example of how the Energy Department and NNSA are overly lax in overseeing contractors, Friedman told lawmakers. He said the government should examine whether “federalizing” security would be better than hiring contractors.

The government budgeted about $150 million for security at the facility, which is run by Babcock & Wilcox Co with security provided by contractor WSI Oak Ridge, owned by international security company G4S.

The investigation into the Y-12 incident found the security camera had been broken for about six months and was part of a backlog of repairs needed for security systems at the facility.

“Our federal oversight should have caught that,” said Thomas D’Agostino, the head of the NNSA, at the hearing.

Six top contractor executives and the guards involved in the incident were fired, and the plant’s manager and chief operating officer have retired, Poneman said.

The government told Babcock & Wilcox last month that its contract could be terminated. A detailed investigation by the Energy Department is underway.

The NNSA has had a long struggle with containing costs and managing safety and security, said Mark Gaffigan, a managing director at the Government Accountability Office.

“The problems we continue to identify in the nuclear security enterprise are not caused by excessive oversight, but instead result from ineffective oversight,” Gaffigan said.

Top Energy Department officials are slated to appear at a second hearing on the issue on Thursday at the House Armed Services Committee, which championed the proposed reforms for governance of the nuclear weapons complex.

‹ Obama attorneys ask court to restore indefinite detention power
Revealed: Harvard cheating scandal which could see over 100 students thrown out of elite college was discovered because of a TYPO ›