Home › Health Technology News › New picture emerging of “terrorist attack” in Benghazi: “We had no military personnel there”

New picture emerging of “terrorist attack” in Benghazi: “We had no military personnel there” 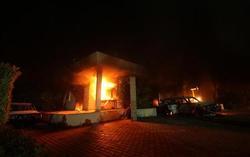 By Tabassum Zakaria and Susan Cornwell

WASHINGTON (Reuters) – The U.S. Consulate in Benghazi apparently was not troubled at first by a smattering of protesters on the anniversary of the September 11 attacks last week, but that changed abruptly at 9:35 p.m. when it sent a message that the building was under heavy assault, U.S. government sources said.

New information emerging a week after attackers launched rocket-propelled grenades and mortars and killed four Americans, including U.S. Ambassador to Libya Christopher Stevens, suggests that the protests at the outset were so small and unthreatening as to attract little notice.

While many questions remain, the latest accounts differ from the initial information provided by the Obama administration, which had suggested that protests in front of the consulate over an anti-Islamic film had played a major role in precipitating the subsequent violent attack.

A senior U.S. counterterrorism official on Wednesday branded the assault in which the four Americans died a “terrorist attack.”

And U.S. intelligence officials are said to be looking closely at the potential role played by an al Qaeda affiliate in North Africa known as Al Qaeda in the Islamic Maghreb, or AQIM.

In recent days, Obama administration officials have slightly softened their claim that the attack was not preplanned, saying that while there is no intelligence to suggest it was, not all the facts are known.

Debate over whether militant groups preplanned the violent assault and whether the consulate was adequately protected have become election-season fodder, with Republican lawmakers demanding answers and the Democratic administration seeking to deflect criticism that it should have been better prepared.

Some new details have emerged this week on security arrangements at the Benghazi consulate.

There were five civilian American security officers at the consulate, congressional aides said on condition of anonymity.

The State Department said it had contracted with a private security firm, U.K.-based Blue Mountain Group, to hire Libyan nationals to carry out security measures at the Benghazi consulate, such as operate metal detectors and sweep cars for explosives.

On Wednesday, Republican lawmakers pressed their questions on U.S. security arrangements in a region where weapons, including sophisticated arms looted from arsenals assembled by the late Libyan leader Muammar Gaddafi, are widely available.

House Armed Services Committee Chairman Howard McKeon said he was “really concerned about the lack of support that the ambassador had, the lack of protection.”

“We had no military personnel there” in Benghazi, McKeon said after a closed-door briefing from Pentagon officials. He said this was “inconceivable” after an attack on the compound earlier in the year.

Secretary of State Hillary Clinton defended the security arrangements earlier this week. “Let me assure you that our security in Benghazi included a unit of host government security forces, as well as a local guard force of the kind that we rely on in many places around the world,” she said on Tuesday.

Matthew Olsen, director of the National Counterterrorism Center, branded the consulate assault a “terrorist attack” that so far appeared to have been an “opportunistic” strike that “began and evolved, and escalated over several hours.”

At a Capitol Hill hearing, he sidestepped a question from Senator Susan Collins about whether there were signs of communication between extremist elements and the local consulate guards. “I think that would be better addressed in the (closed, classified) session that we’re going to have tomorrow,” he said.

U.S. officials said the possibility of such collusion is part of their investigation.

Clinton, along with Director of National Intelligence James Clapper, is to brief lawmakers behind closed doors on Thursday.

The arrival of FBI investigators in Libya was initially delayed due to security concerns. But an investigation team has now arrived in Tripoli and should reach Benghazi before the end of the week, U.S. officials said. Their goal is to determine what happened on the ground and who was responsible.

Republican lawmakers said they agreed with Libyan officials who said the attack was preplanned.

Olsen told lawmakers that it appeared that a “number of different elements” were involved, including individuals connected to militant groups.

“We are looking at indications that individuals involved in the attack may have had connections to al Qaeda or al Qaeda’s affiliates; in particular, al Qaeda in the Islamic Maghreb,” Olsen said.

Obama administration officials say U.S. intelligence agencies had not seen any warnings to indicate the consulate was going to be attacked.

Representative Mike Rogers, the House Intelligence Committee chairman, told Reuters that CIA analysts were “only moderately confident” that the attack was a spontaneous event.

“I think it was a preplanned event to have occurred probably on 9/11. It seemed well-coordinated,” Rogers, a Republican, said and described it as an “al Qaeda-style attack.”

He said there was command-and-control on the ground, with initial reports showing clearly that the attackers were moving toward specific targets on the compound.

“They had objectives, they had targets they were working toward, they were using military style movements … I just look at that and think I don’t know how you say that that wasn’t a pre-planned event when you have that kind of coordination,” Rogers said.

Representative C.A. “Dutch” Ruppersberger, the senior Democrat on the House Intelligence Committee, said the Benghazi protest was peaceful for about two hours and it was only after the sun went down that the attackers showed up, suggesting that it was an opportunistic assault rather than long-planned.

He said areas like Benghazi are similar to “the Wild West years ago” where it is not unusual to see people driving around with weapons.

“Something was planned, it’s just when it was planned. Was it days before, or was it as a result of the protest and an extremist radical group like al Qaeda taking advantage of it?” Ruppersberger said in an interview.

U.S. government sources said official message traffic showed that the first communication about a full-scale assault on the consulate was sent at 9:35 p.m. local time in Libya.

That led some officials who are looking into the incident to conclude that any earlier protests at the consulate were sufficiently minor that they weren’t worth reporting.

‹ Revealed: Ringleader behind ‘al-Qaeda attack that killed U.S. ambassador was former Guantanamo inmate handed over to Libya by America’
Out-Of-This-World Nanoscience: A Computer Chip That Can Assemble Itself? ›