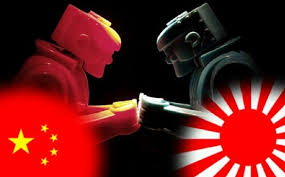 China’s most powerful military leader, in an unusual public statement, last week ordered military forces to prepare for combat, as Chinese warships deployed to waters near disputed islands and anti-Japan protests throughout the country turned violent.

Protests against the Japanese government’s purchase of three privately held islands in the Senkakus chain led to mass street protests, the burning of Japanese flags, and attacks on Japanese businesses and cars in several cities. Some carried signs that read “Kill all Japanese,” and “Fight to the Death” over disputed islands. One sign urged China to threaten a nuclear strike against Japan.

“The message I have tried to convey is we have to urge calm and restraint on all sides,” he said, noting any “provocation” could produce a “blow up.”

Panetta repeated the U.S. position that it is neutral in the dispute over Japan’s Senkaku islands, a small chain of islets located south of Okinawa and north of Taiwan. But he also reaffirmed the U.S. defense commitment to Japan, a treaty ally.

“We stand by our treaty obligations,” Panetta said, echoing a similar commitment made during a 2010 standoff between Beijing and Tokyo over the Senkakus. ”They’re longstanding, and that has not changed.”

China claims the islands as its territory and calls them the Diaoyu islands.