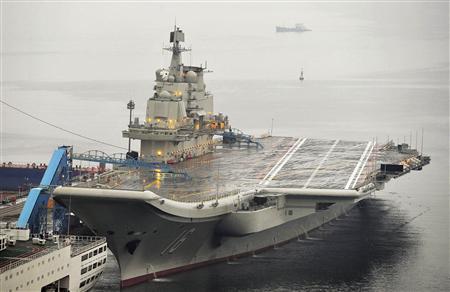 TOKYO/BEIJING (Reuters) – China sent its first aircraft carrier into formal service on Tuesday amid a tense maritime dispute with Japan, a show of naval force that could worry its neighbors.

In fact, the aircraft carrier, refitted from a ship bought from Ukraine, will have a limited role, mostly for training and testing ahead of the possible launch of China’s first domestically built carriers after 2015, analysts say.

But China cast the formal handing over of the carrier to its navy as a triumphant show of national strength — at a time of bitter tensions with neighboring Japan over islands claimed by both sides.

“China will never tolerate any bilateral actions by Japan that harm Chinese territorial sovereignty,” Vice Foreign Minister Zhang Zhijun said on Tuesday. “Japan must banish illusions, undertake searching reflection and use concrete actions to amend its errors, returning to the consensus and understandings reached between our two countries’ leaders.”

The risks of military confrontation are scant, but political tensions between Asia’s two biggest economies could fester.

For the Chinese navy, the addition of carriers has been a priority as it builds a force capable of deploying far from the Chinese mainland.

China this month warned the United States, with President Barack Obama’s “pivot” to Asia, not to get involved in separate territorial disputes in the South China Sea between China and U.S. allies such as the Philippines.

U.S. Secretary of State Hillary Clinton in turn urged China and its Southeast Asian neighbors to resolve disputes “without coercion, without intimidation, without threats and certainly without the use of force”.

The timing of the carrier launch might be associated with China’s efforts to build up patriotic unity ahead of a Communist Party congress that will install a new generation of top leaders as early as next month.

Narushige Michishita, a security expert at the National Graduate Institute for Policy Studies in Tokyo, said he thought the timing had nothing to do with the islands dispute.

“China is taking another step to boost its strategic naval capability,” he said. “If they come to have an operational aircraft carrier, for the time being we are not super-concerned about the direct implications for the military balance between the U.S. and Japan on the one hand, and China on the other. This is still not cutting edge.”

The East China Sea tensions with Japan have been complicated by the entry of Taiwan, the self-ruled island that Beijing calls an illegitimate breakaway, which also lays claim to the islands.

Japan protested to Taiwan, a day after it lodged a complaint with China over what it said was a similar intrusion by Chinese boats.

Taiwan has friendly ties with Japan, but the two sides have long squabbled over fishing rights in the area. China and Taiwan both argue they have inherited China’s historic sovereignty over the islands.

The flare-up in tension comes at a time when both China and Japan confront domestic political pressures. Japanese Prime Minister Yoshihiko Noda’s government faces an election in months, adding pressure on him not to look weak on China.

China’s Communist Party is preoccupied with the leadership turnover, with President Hu Jintao due to step down.

(Additional reporting by Linda Sieg in Tokyo and Sui-Lee Wee in Beijing; Editing by Nick Macfie)