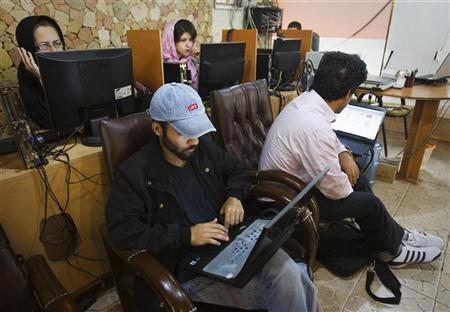 Customers use computers at an internet cafe in Tehran May 9, 2011.

DUBAI (Reuters) – Iran is prepared to defend itself in case of a “cyber war” which could cause more harm than a physical confrontation, a commander in the country’s Revolutionary Guards said on Tuesday.

The Islamic Republic has tightened cyber security since its uranium enrichment centrifuges were hit in 2010 by the Stuxnet computer worm, which it believes came from Israel or the United States.

“We have armed ourselves with new tools, because a cyber war is more dangerous than a physical war,” said Abdollah Araqi, deputy commander of ground forces in the Islamic Revolutionary Guard Corps (IRGC), according to the Iranian Students’ News Agency (ISNA).

Israel has threatened to bomb Iran’s nuclear sites if diplomatic efforts fail to stop the nuclear work it believes is aimed at getting weapons capability, a charge Tehran denies.

Many analysts are skeptical that airstrikes could completely destroy Iran’s nuclear projects and that cyber attacks like Stuxnet might be more effective.

Iran detected a computer virus in April inside the control systems of Kharg Island – which handles the vast majority of its crude oil exports – but the terminal remained operational.

Tehran is working towards developing a national Internet, saying that would improve cyber security. But many Iranians believe the plan is the latest way to control their access to the web, already highly censored.

Iran denied on Sunday that its hackers attacked U.S. banks, following a Reuters report that three of the largest American lenders were repeatedly targeted over the past year.