Russia’s space agency wants to send a mission to Apophis, the notorious asteroid which may change its course and eventually collide with Earth. It will plant a radio beacon, which will help track the celestial body and assess the risks it poses.

The 300-meter-wide asteroid first made headlines in 2004, when NASA reported that it has 1 chance in 223 of impacting on our planet in 2029. It was even named after the Ancient Egyptian evil god, archenemy of the sun god Ra. 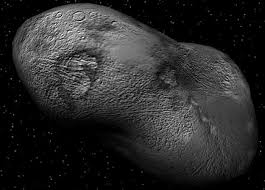 But additional observations proved that it will pass by at the small, but safe, distance of some 36,000 kilometers from Earth. The close approach however may result in an unpredictable gravitational pull on Apophis, which would change its course and pose a danger in 2036, when it comes back.

To better assess the risks it poses to the civilization the Roscosmos plans a robotic mission to the asteroid, chief Vladimir Popovkin announced on Monday.

The plan is “to land a module on the surface of Apophis and set up a radio beacon there, which will work after the spaceship’s lifetime expires,” he said at the Space Research Institute in Moscow.

The beacon signal will allow astronomers to better calculate Apophis’ movement and the effect of the 2029 Earth flyby. The mission would not be launched before 2020.