A single mysterious computer program that placed orders — and then subsequently canceled them — made up 4 percent of all quote traffic in the U.S. stock market last week, according to the top tracker of high-frequency trading activity. The motive of the algorithm is still unclear.

The program placed orders in 25-millisecond bursts involving about 500 stocks, according to Nanex, a market data firm. The algorithm never executed a single trade, and it abruptly ended at about 10:30 a.m. ET Friday. 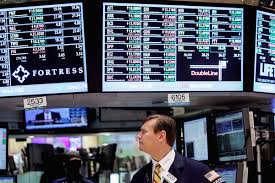 “Just goes to show you how just one person can have such an outsized impact on the market,” said Eric Hunsader, head of Nanex and the No. 1 detector of trading anomalies watching Wall Street today. “Exchanges are just not monitoring it.”

Hunsader’s sonar picked up that this was a single high-frequency trader after seeing the program’s pattern (200 fake quotes, then 400, then 1,000) repeated over and over. Also, it was being routed from the same place, the Nasdaq.

“My guess is that the algo was testing the market, as high-frequency frequently does,” says Jon Najarian, co-founder of TradeMonster.com. “As soon as they add bandwidth, the HFT crowd sees how quickly they can top out to create latency.”

Translation: The ultimate goal of many of these programs is to gum up the system so it slows down the quote feed to others and allows the computer traders (with their co-located servers at the exchanges) to gain a money-making arbitrage opportunity.

The scariest part of this single program was that its millions of quotes accounted for 10 percent of the bandwidth that is allowed for trading on any given day, according to Nanex. (The size of the bandwidth pipe is determined by a group made up of the exchanges called the Consolidated Quote System.)

“This is pretty out there to see this affect this many stocks at the same time,” said Hunsader, adding that high-frequency traders are doing anything to “tip the odds in their favor.

‹ Super-sizing the soldier: Is obesity going to pose a huge recruiting problem?: At present, 62 percent of active duty military members over the age of 20 have a body mass index that falls into either the overweight or obese category
The map that Apple HAS to make blurred: Taiwanese government complains new maps app is revealing military secrets ›