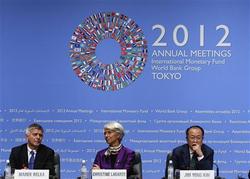 By Anna Yukhananov and Tetsushi Kajimoto

TOKYO (Reuters) – World finance leaders on Saturday endorsed a checklist of policy reforms aimed at pressuring Europe and the United States to tackle debt troubles that threaten to choke off global growth.

To hold each others’ feet to the fire, the nations — meeting under the aegis of the International Monetary Fund — agreed to review progress in six months.

The checklist and checkup were an acknowledgement of frustration within the IMF and among many emerging market economies over a sluggish and piecemeal policy response to the major risks facing the world economy.

IMF chief Christine Lagarde said nations had narrowed their differences over how to implement policy, seeking to downplay disagreements between the Fund and Germany over how quickly debt-laden countries such as Greece should cut budgets.

“There was no objection to the recommendation that we gave to the membership, which was A-C-T,” Lagarde said, spelling out the word letter by letter.

“We might not always agree on everything, but I think there is a general consensus that collective action is going to produce results,” she told reporters.

In a communique released after two days of talks, IMF members warned that global economic growth was decelerating and that substantial uncertainties and risks remained.

But the IMF’s governing panel, representing the 188 member countries, praised steps that had already been taken, particularly in Europe, to make the world financial system safer, even if they had not yet gone far enough.

“Members all agreed that we are in a better position today than we were six months ago,” said Singapore Deputy Prime Minister Tharman Shanmugaratnam, the chairman of the committee.

Spain’s economy minister, Luis de Guindos, said he felt the mood toward his country lifting too. Spain is under pressure to seek a bailout as it struggles to cope with high government debt and the cost of recapitalizing its banks.

“The atmosphere, from International Monetary Fund policymakers or from the private sector, is much more positive than it was before the summer,” de Guindos said.

“Were moving, we’re taking steps, we’re preparing it,” said a senior official who is directly involved in talks about potential Spanish aid. “Things will crystallize in November.”

U.S. presidential elections and a once-a-decade leadership change in China are just weeks away. The euro area has to navigate decisions through several national governments, which Russian Finance Minister Anton Siluanov likened to maneuvering a supertanker with 17 captains at the helm.

“If you decide to turn it in one direction, it happens very slowly,” he said.

Reports from the IMF this week downgraded global economic growth forecasts for the second time since April and warned of the need for action in advanced economies to treat a debt hangover that stems in part from earlier efforts to quell the global financial crisis.

To replenish its crisis-fighting war chest, the IMF has taken in $461 billion in contributions from member countries, with Algeria and Brunei the newest members of the donor group, Lagarde said. The United States is among the notable absences from the list of contributors.

Frustration over what many nations see as plodding progress in Europe and in Washington spilled into public view during the meetings.

“Asia alone can’t carry the global economy,” said Australian Treasurer Wayne Swan. “It is time for the other players to get off the benches and start to pull their weight on global economic growth again.”

Emerging markets, which have been caught in the downdraft created by weak economies in Europe and the United States, were disappointed that the IMF missed its target for enacting voting reforms that would make China the third most influential country within the lending institution.

Lagarde said there were “one or two countries” that had not finalized the reforms, which were agreed in 2010, a thinly veiled reference to the United States. The Obama administration does not want to seek congressional approval for more IMF funding before the November presidential election.

European leaders argued this week they had taken big strides toward building a stronger fiscal and banking union, and they earned at least some recognition from the rest of the world.

“This broad framework offers a more promising strategy for addressing the crisis,” U.S. Treasury Secretary Timothy Geithner said. “However, what is important is how it will be applied.”

“If we are not fast enough for markets, sorry, but markets have to wait,” he said.