EEV: Real News from Cyprus has become difficult to obtain. Search engines seem to have been re-prioritized for unknown reasons.

* For those looking for accurate news from Cyprus, I recommend http://www.cyprus-mail.com/ 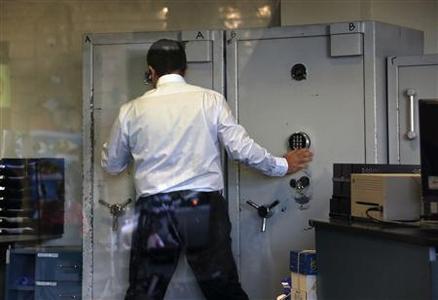 . Customers queue up outside a branch of Laiki Bank as they wait for the reopening of the bank in Nicosia March 28, 2013.

By Karolina Tagaris and Michele Kambas

NICOSIA (Reuters) – Cyprus conceded on Thursday that tight capital controls would remain in force longer than expected as the island’s banks reopened for the first time after the government was forced to accept a tough EU rescue package to avoid bankruptcy.

Cypriots lined up calmly to withdraw limited amounts of cash, but there was no sign of a run on deposits, as had been feared.

Banks were shut for nearly two weeks while the government negotiated a 10 billion euro ($13 billion) international bailout, the first in Europe’s single currency zone to impose losses on bank depositors.

Curbs on money movements imposed after the bailout would be phased out over about a month, Foreign Minister Ioannis Kasoulides said.

The government initially said the controls would remain in place for a week, subject to review. Economists say they will prove hard to lift as long as the economy is in crisis.

Bank staff turned up for work early on Thursday as cash was delivered by armored trucks, and queues of a dozen or more people formed at bank branches in the capital, with uniformed security guards on duty.

A lot of money had already left electronically. Figures published by the Central Bank of Cyprus showed that savers from other euro zone countries withdrew 18 percent of their deposits from the stricken island in February, as talk of a tax on bank accounts gained ground. Overall private sector bank deposits in Cyprus fell by 2.2 percent to 46.4 billion euros last month, after a similar drop in January.

To help the Cyprus banks weather the crisis, the European Central Bank flew in 5 billion euros ($6.4 billion) in cash overnight from Frankfurt, a German newspaper reported.

The government said it had appointed a panel to investigate the banking meltdown and look into claims of junior bondholders.

“It will have a broad mandate,” said Constantinos Petrides, under-secretary to the Cypriot president. “It will investigate criminal, civil and political responsibilities.”

The capital controls decree was taped to the windows of bank branches and staff handed out copies to customers. In Nicosia, there was relief, but some apprehension about what might happen.

“You’ve no idea how much I’ve been waiting for this,” said 64-year-old pensioner Froso Kokikou, waiting in line at a branch of Cyprus Popular Bank, also known as Laiki.

“I feel a sense of fear and disappointment having to queue up like this; it feels like a Third World country, but what can you do?” Kokikou said. “This is what they imposed on us and we have to live with it.”

Kostas Nikolaou, a 60-year-old pensioner, said the uncertainty of the past two weeks had been “like a slow death”.

He added: “How can they tell you that you can’t access your own money in the bank? It’s our money, we are entitled to it.”

Many of those waiting in line were elderly people, who said they had run out of cash because they did not have bank cards.

President Nicos Anastasiades praised the “maturity and responsibility” shown by Cypriots in the face of the crisis.

“We have shown that not only do we want to drag our country out of this difficult position, but that we will do it,” a statement from the presidency said.

Anastasiades has taken a 25 percent pay cut, while cabinet ministers’ pay will go down by 20 percent, an official said.

The stock exchange said it would remain closed on Thursday.

On international markets, German 10-year bond yields fell to their lowest level since August on fears of spillover from the Cyprus crisis to other struggling euro zone members. Yields fell 2 basis points to 1.256 percent. Traders cited the risk that depositors in other countries could take fright at any signs of a run on deposits in Cyprus.

A Finance Ministry decree limited cash withdrawals to no more than 300 euros per day and banned the cashing of cheques.

A police source told Reuters that passengers leaving Cypriot airports were subject to extra searches. Notices at Larnaka airport warned travelers of the new restrictions and officers had orders to confiscate cash above the 1,000 euro limit.

With just 860,000 people, Cyprus has about 68 billion euros in its banks – a vastly outsized financial system that attracted deposits from abroad, especially Russia, as an offshore haven but foundered when investments in neighboring Greece went sour.

The European Union and International Monetary Fund concluded that Cyprus could not afford a rescue unless it imposed losses on depositors, seen as anathema in previous euro zone bailouts.

Foreign minister Kasoulides reflected the anger of many Cypriots when he told French newspaper Les Echos: “Europe is pretending to help us but the price to pay is too high: nothing less than the brutal destruction of our economic model.”

Cyprus’s difficulties have sent jitters around the fragile single European currency zone. Yields on Slovenia’s two-year bonds surged to nearly 7 percent on Thursday in a sign that investors are pricing in a high risk of default, despite denials by the new government that it needs a bailout.

The imposition of capital controls has led economists to warn that a second-class “Cyprus euro” could emerge, with funds trapped on the island worth less than euros that can be freely spent abroad.

The European Commission said the capital controls were legal and justified under EU law provided they were strictly temporary and proportionate. The EU executive said it would monitor “the need to extend the validity of or revise the measures”.

The bailout, agreed in Brussels on Monday, looks set to push Cyprus deeper into an economic slump, shrink the banking sector and cost thousands of jobs.

Cyprus Popular Bank, the country’s second biggest, will be closed and its guaranteed deposits of up to 100,000 euros transferred to the largest bank, Bank of Cyprus.

Deposits of more than 100,000 euros at both banks, too big to enjoy a state guarantee, will be frozen, and some of those funds will be exchanged for shares issued by the banks to recapitalize them.

While big depositors will lose money, the authorities say deposits up to 100,000 euros will be protected.