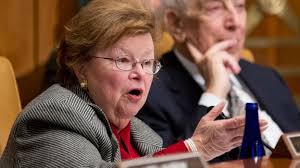 The blowback caused by a new law that lets biotech companies like Monsanto escape litigation is so tremendous that a senior senator from Maryland has offered the public an apology.

US Senator Barbara A. Mikulski (D-Md.) has issued a statement expressing her regret for letting this year’s Agriculture Appropriations bill — an annual continuing resolution spending act — be signed into law.

“Senator Mikulski understands the anger over this provision. She didn’t put the language in the bill and doesn’t support it either,” begins a statement from her office dated Friday, March 29.

As we reported earlier, US President Barack Obama inked his name last Tuesday to the bill, H.R. 933, and in doing so signed off on a deal that essentially prevented a government-wide shut down. In doing as much, though, the president approved a provision that lets the companies that make genetically modified organisms (GMOs) and genetically engineered (GE) seeds step over legal hurdles in the future regarding lab-made products that may later be proven to be dangerous or deadly to the population.

Included in the bill is a rider, Section 735, which says federal courts cannot intervene and halt biotech companies from planting and selling GMO goods to the public, even if testing proves them to be potentially hazardous to the greater public. Because the legislation largely shields agriculture giants Monsanto from litigation, it has been dubbed by its critics the “Monsanto Protection Act.” But even after more than 250,000 people signed a petition asking the White House to intervene and ensure the bill was not passed, Pres. Obama nonetheless approved it last week.