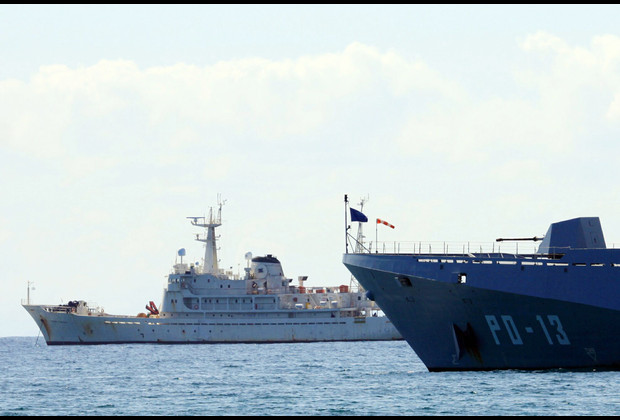 Venezuelan authorities said the ship’s 36 crew members, including five U.S. citizens and two Brazilians, would be held on board while an investigation continued.

Adm. Angel Belisario Martinez told local station Union Radio that the research ship was conducting “unauthorized scientific work” in Venezuela’s exclusive economic zone. He said the case had been turned over to prosecutors.

Venezuela’s Foreign Ministry had said Friday that the ship and its crew would be subject to an “inquiry under the International Maritime Law and pursuant to the safeguarding of our sovereignty in maritime areas.”

The 285-foot survey ship Teknik Perdana was detained by Venezuelan sailors Thursday in contested waters off the coast of Guyana. The seizure is threatening to revive a decades-old territorial dispute between Venezuela, South America’s biggest oil producer, and Guyana, one of the region’s poorest countries.

The vessel, sailing under a Panamanian flag, was conducting a seismic study for Anadarko Petroleum Corp. under a concession from Guyana. Guyana’s government says the crew was well within Guyana’s territorial waters.

Texas-based Anadarko said it was working with the U.S. and Guyanese governments to secure the release of the crew and the vessel.

Gregory Adams, spokesman for the U.S. Embassy in Caracas, told The Associated Press that the embassy had not been given any official information on the five detained U.S. citizens.

Guyana’s government on Saturday requested a meeting with Venezuelan officials next week to discuss the seizure, which its Foreign Ministry earlier called an “unprecedented” act in Guyana-Venezuela relations.

Venezuela has for decades claimed two-thirds of Guyana’s territory as its own, arguing that the gold-rich region west of the Essequibo River was stolen from it by an 1899 agreement with Britain and its then colony. The area is a fixture of 19th century maps of Gran Colombia, the short-lived republic revered by the late Venezuelan leader Hugo Chavez.

Ties between the two countries had improved recently. Chavez’s successor, Nicolas Maduro, made his first visit as president to Georgetown in August to discuss joint oil projects with his Guyanese counterpart, Donald Ramotar. During the visit, Maduro described the dispute as a relic of the colonial era and vowed to peacefully resolve the issue.

Copyright (2013) Associated Press. All rights reserved. This material may not be published, broadcast, rewritten, or redistributed.