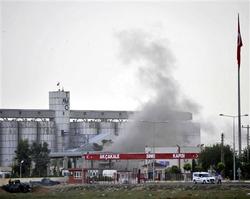 ISTANBUL (Reuters) – Turkish forces fired across the frontier into Syria on Sunday after a shell launched from Syria landed in Turkey’s border town of Akcakale, underlining Ankara’s warning that it will respond with force to any violence spilling over into its territory.

It was the fifth consecutive day of Turkish retaliation against incoming bombardment from northern Syria, where President Bashar al-Assad’s forces have been battling rebels who control swathes of land close to the Turkish frontier.

The continued exchanges are the most serious cross-border violence in Syria’s revolt against Assad, which began in March last year with protests for reform but has evolved into a civil war with sectarian overtones which threatens to draw in regional powers.

The latest Syrian shell landed near a plant belonging to the Turkish Grain Board, the Dogan news agency reported, several hundred metres from the center of Akcakale where five civilians were killed on Wednesday in previous Syrian artillery fire.

The Syrian Observatory for Human rights said shells fired in retaliation from Turkey on Sunday landed near the Syrian town of Tel Abyad, where rebels have been battling Assad’s forces.

There were no immediate reports of casualties.

NATO member Turkey was once an ally of Assad’s but turned against him after his violent response to the uprising in which activists say 30,000 people have died.

Turkey has nearly 100,000 Syrian refugees in camps on its territory, has allowed rebel leaders sanctuary and has led calls for Assad to quit. Its armed forces are far larger than Syria’s.

Prime Minister Tayyip Erdogan has said Turkey does not want war, but warned Syria not to test its resolve.

“You have to be ready at every moment to go to war if it is necessary. If you are not ready for this, you are not a state,” Erdogan said in a speech in Istanbul on Sunday.

“What did our forefathers say? ‘If you want peace prepare for war’ … If you suffer an outrage, you will do what is necessary. Look, we are retaliating in kind,” he said. “If you strike, you will see the retaliation immediately.”

Turkey and other Sunni Muslim powers in the region, including Saudi Arabia and Qatar, have backed the rebels who are trying to topple Assad, a member of Syria’s Alawite minority which is an offshoot of Shi’ite Islam. Iran’s Shi’ite rulers, and the Lebanese Shi’ite movement Hezbollah, are strong Assad allies.

The cross-border fire at Akcakale followed a similar incident on Saturday when three mortar bombs fired from Syria landed near the Turkish village of Guvecci, prompting retaliatory fire from Turkey.

The British-based Observatory, which monitors violence through a network of activists inside Syria, said that Syrian barrage was part of a fierce battle between Assad’s forces and rebels for control of the border village of Khirbet al-Joz.

It said rebels seized control of the area after a 12-hour battle on Saturday in which at least 40 Syrian soldiers and nine rebels were killed. The death toll could not be independently verified.

On Sunday, a rebel flag flew over a Syrian military post in the area, visible from the Turkish side of the border.

“In the last four days there were heavy clashes going on here. We couldn’t sleep. Yesterday morning, the Syrian army controlled this area. Now it is calmer,” said Turkish villager Musa Sasak, 27.

Although outgunned by Assad’s forces, rebels have taken control of several border crossings with Turkey and Iraq as well as large areas of rural territory.

They are also battling for control of Aleppo, Syria’s biggest city, and have kept a foothold in the suburbs of Damascus despite a heavy army counter-offensive, backed by air strikes from jets and helicopter gunships.

“I met in Damascus a president who was very aware of the critical situation. He did not appear detached but self-confident and combative,” said Salehi, who held talks with Assad two weeks ago. “The president appeared convinced it was possible to win the conflict in Syria through military means.”

Salehi added that Assad was “open for any solution that came from within Syria”, but rejected being pushed out by foreign pressure, adding there was no question of him seeking asylum. The Assad family has been in power in Syria for 42 years.

International pressure on Assad has been curbed by deadlock at the United Nations Security Council, where Russia and China have blocked Western-backed draft resolutions which could have led to U.N. sanctions on Syria.

With major powers paralyzed, the death toll has escalated to more than 1,000 a week, according to Observatory figures.

At least 70 people were killed across Syria on Sunday, the group said. The bodies of 21 men had been found in the town of Hameh, in Damascus province, believed to have been killed by soldiers, while at least 13 people were killed in Aleppo, Syria’s biggest city where Assad’s forces have been fighting rebels for two months.