Factbox: Outlines of Cyprus’ bailout by the euro zone

EEV: Even though this is being reported through a major news organization, it still needs validation. Meetings were out of the public view, so there currently is no way to determine what has actually been agreed to. Confiscation of a peoples savings without warning, by one government to pay another governments debt is unprecedented in recent history. 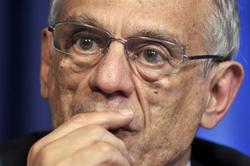 BRUSSELS (Reuters) – Euro zone ministers struck a deal on Saturday to hand Cyprus a bailout worth 10 billion euros ($13 billion) to stave off bankruptcy. Under the program, the island’s debt should fall to 100 percent of economic output by 2020.

Here are the outlines of the financial package:

– Nicosia will impose a 9.9 percent one-off levy on deposits above 100,000 euros in Cypriot banks and a tax of 6.75 percent on smaller deposits from March 19. The levy will generate 5.8 billion euros.

Depositors will be compensated by equity in the banks.

There will also be a tax on interest that the deposits generate.

– Cyprus has agreed to increase its nominal corporate tax rate by 2.5 percentage points to 12.5 percent, which could bring in up to 200 million euros a year.

– The International Monetary Fund is expected to contribute to the rescue package, but the amount is still to be determined.

– Russia will likely help finance the program by extending a 2.5 billion euro loan already made to Cyprus by five years to 2021 and reducing the interest rate, which is now at 4.5 percent.

– Cyprus may be required to privatize the Cypriot telecoms company, the electricity company and the ports authority.

Only seven percent of adults have good cardiometabolic health